Eddie Lavelle is a character in the film Do the Right Thing, portrayed by Richard Parnell Habersham. He is a young boy who hangs around the neighborhood. He is approached by Da Mayor, who gives him money to get him some Miller High Life from the Korean grocery store.

When an ice cream truck comes by, Eddie runs out to the road, where a driver recklessly drives a car. Eddie almost gets hit by it but gets saved by Da Mayor. When Eddie's mother, Louise, comes out, Eddie tells her about Da Mayor knocking him down and chafing his elbows. When Da Mayor tells what actually happened, Eddie gets spanked by his mother.

Later in the film, when a fight occurs, he yells out "Fight!" 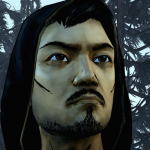